MEMS market to propel toward double-digit growth in 2010

Powered by the seemingly recession-proof performance of the mobile phone and consumer electronics segments, the market for MEMS sensors is set to return to growth in 2010 after two straight years of decline, according to iSuppli Corp. Approaching a point close to the historical peak of 2007, MEMS revenue this year is projected to reach $6.54 billion, up 11.1 percent from $5.88 billion last year. The double-digit expansion predicted for 2010 compares to a decline of 6.8 percent posted in 2009, on top of a 3.6 percent contraction in 2008, iSuppli figures show. The market is predicted to expand through 2014, by when it is projected to grow by another $3.3 billion to hit $9.8 billion -- equivalent to an annual growth rate of 10.7 percent throughout the 2009-2014 period. 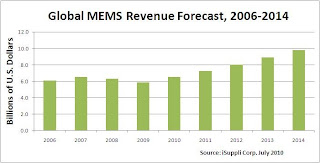