The integration and use of RF MEMS switches in microstrip patch antennas and feed structures were investigated for developing reconfigurable multi-band antennas. The current application focuses on the development of a dual L/X-band antenna that would support several satellite or UAV-based communications and radar applications such as SAR, terrain mapping, GMTI, AMTI, etc. A reconfigurable patch module (RPM) was designed and fabricated consisting of a 3x3 array of patches connected together using MEMS switches (we simulated MEMS switches with ideal OPEN/CLOSED switches). This RPM could be used as a basic element in a tile/conformal architecture. Stripline power dividers and blind via transitions were developed to demonstrate feed structures that could be located below the radiating aperture.

Reconfigurable multi-band phased-array antennas are receiving a lot of attention lately due to the emergence of RF MEMS (micro-electro-mechanical systems) switches [1-6]. A MEMS-switched reconfigurable multi-band antenna is one that can be dynamically reconfigured within a few microseconds to serve different applications at drastically different frequency bands, such as communications at L-band (1-2 GHz) and synthetic aperture radar (SAR) at X-band (8-12.5 GHz).
The Air Force also uses both ground- and airborne- moving target indication (GMTI/AMTI) at these frequencies in order to detect moving targets such as vehicles on the ground and low observables in the air. The RF MEMS switch is attractive because it shows of achieving excellent switching characteristics [2] over an extremely wide band (DC-40 GHz and upwards). These switches can also be used to develop wideband phase shifters [3]. Although there is currently a tremendous amount of research in RF MEMS devices, reliability and packaging of the switches continue to be problematic. The switches are also limited in their power handling capability.In this work, we do not focus on the development of the MEMS switches themselves. Rather, we want to use them as control elements in a reconfigurable antenna. Since the actual MEMS switches were not available to us at the time of this work, we simulated the MEMS switches using ideal OPEN and CLOSED circuits. There is actually a great deal of work to develop optimal radiating elements and feed structures in order to achieve the desired multi-band performance.
Reconfigurable Patch Module (RPM): We investigated the design and fabrication of a dual L/X-band reconfigurable antenna. Microstrip antenna elements were chosen due to their inherent lowprofile, which is suitable for satellite and UAV applications. We used RT/duroid 5880 material with a dielectric constant of 2.2 and a loss tangent of 0.0009 at 10 GHz. Two material thicknesses were investigated: 0.062" and 0.125". The material thickness must be chosen carefully, since it controls both the bandwidth and array scanning performance. The thicker the material, the more bandwidth, particularly at the low frequency end. However, if the substrate becomes too thick, surface waves are generated and array scanning performance and efficiency is lost. Figure 1 shows a picture of the 3x3 RPM fabricated on 0.125" duroid. The patches are 0.370" square and separated by 0.590" on center. Interconnecting tabs are 0.050" wide and 0.085" long. The "reconfigurable" antenna was actually fabricated as two separated prototypes (OPEN and CLOSED configurations) for testing in the laboratory. 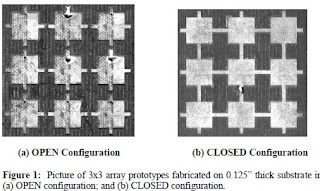 shows the measured return loss for the 3x3 RPM in Figure 1 for both the CLOSED (L-band) and OPEN (S-band) configurations. We were able to achieve 1.2% impedance bandwidth for the L band configuration and greater than 7% bandwidth at X-band. This bandwidth was limited rimarily by the substrate thickness. Figures 3 and 4 show the measured radiation patterns at both L-band and X-band. Computer simulation results for both the return loss and radiation patterns agree well with the measurements, and will be shown in the talk. 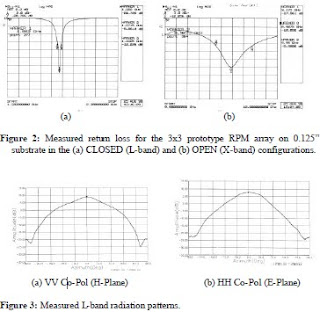