With the ever-increasing need for mobile communication and the emergence of many systems, it isimportant to design broadband antennas to cover a wide frequency range. The design of an efficientwide band small size antenna, for recent wireless applications, is a major challenge. Microstrip patchantennas have found extensive application in wireless communication system owing to theiradvantages such as low-profile, conformability, low-cost fabrication and ease of integration with feednetworks(He et al., 2008). However, conventional microstrip patch antenna suffers from very narrowBroadband Microstrip Patch Antenna 175bandwidth, typically about 5% bandwidth with respect to the center frequency. This poses a designchallenge for the microstrip antenna designer to meet the broadband techniques (Lau et al., 2006,Zhang & Wang, 2006).There are numerous and well-known methods to increase the bandwidth of antennas, includingincrease of the substrate thickness, the use of a low dielectric substrate, the use of various impedancematching and feeding techniques, the use of multiple resonators, and the use of slot antenna geometry(Pozer, 1995,Wi et al., 2002, Wi et al., 2006, Matin et al., 2007). However, the bandwidth and the sizeof an antenna are generally mutually conflicting properties, that is, improvement of one of thecharacteristics normally results in degradation of the other.Recently, several techniques have been proposed to enhance the bandwidth. A novel singlelayer wide-band rectangular patch antenna with achievable impedance bandwidth of greater than 20%has been demonstrated (Yang et al. 2001). Utilizing the shorting pins or shorting walls on the unequalarms of a U-shaped patch, U-slot patch, or L-probe feed patch antennas, wideband and dual-bandimpedance bandwidth have been achieved with electrically small size in (Guo et al., 2002, Chair et al.,2005). Other techniques involves employing multilayer structures with parasitic patches of variousgeometries such as E, V and H shapes, which excites multiple resonant modes. However, theseantennas are generally fabricated on thicker substrates (Bao & Ammann, 2007).In this paper, a novel slotted shape patch is investigated for enhancing the impedancebandwidth on a thin substrate (about 0.01 0λ ). The design employs contemporary techniques namely,the L-probe feeding, inverted patch, and slotted patch techniques to meet the design requirement. Inthis paper, the design and simulations results of the novel wideband microstrip patch antenna, isdescribed.Antenna Design and StructureIt is known that increasing the thickness of the patch antenna will increase the impedance bandwidth.However, the thicker the substrate of the antenna, the longer the coaxial probe will be used and, thus,more probe inductance will be introduced (Yang et al. 2001), which limits the impedance bandwidth.Consequently, a patch antenna design that can counteract or reduce the probe inductance will enlargethe impedance bandwidth.Figure 1 depicts the geometry of the proposed patch antenna. The inverted rectangular patch,with width W and length L is supported by a low dielectric superstrate with dielectric permittivity ε1and thickness h1. An air-filled substrate with dielectric permittivity εo and thickness ho is sandwichedbetween the superstrate and a ground plane.The proposed patch integrates both the E- and H-shaped patch on the same radiating element.For the E-shaped, the slots are embedded in parallel on the radiating edge of the patch symmetricallywith respect to the centerline (x-axis) of the patch and for the H-shaped the slots are embedded in serialon the non-radiating edge of the patch. The E- and H-shaped are shown in Figure1(a), where, l and ware the length and width of the slots. The patch is fed by an L-shaped probe with height, hP andhorizontal length, lP along the centerline (x-axis) at a distance fP from the edge of the patch as shown inFigure 1(b). Table 1 shows the optimized design parameters obtained for the proposed patch antenna.A Rogers RT 5880 Duroid™ dielectric substrate with dielectric permittivity, ε1 of 2.2 and thickness, h1of 0.01 0 λ has been used in this research. The thickness of the air-filled substrate, ho is 16.5 mm. AnAluminum plate with dimensions of 1.378 0 λ ×1.23 0 λ and thickness of 1 mm is used as the groundplane. The proposed antenna is designed to operate in the 1.88 GHz to 2.22 GHz region. The use of Lprobefeeding technique with a thick air-filled substrate provides the bandwidth enhancement, whilethe application of superstrate with inverted radiating patch offers a gain enhancement, and the use ofparallel and series slots reduce the size of the patch. The use of superstrate on the other hand wouldalso provide the necessary protections for the patch from the environmental effects. By incorporatingextra slots in radiating edges, the gain and cross polarization has been improved. In addition, the176 Mohammad Tariqul Islam, Mohammed Nazmus Shakib, Norbahiah Misran and Tiang Sew Sunantenna is relatively compact in comparison with the slotted antenna described in (Tariqul Islam et al.,2007). These techniques offer easy patch fabrications, especially for array structures 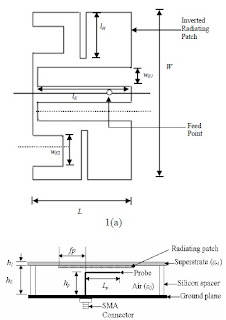 The resonant properties of the proposed antenna have been predicted and optimized using a frequencydomain three- dimensional full wave electromagnetic field solver (Ansoft HFSS). The design flowdiagram is shown in Figure 2, starting with a baseline design of the inverted rectangular patch with anBroadband Microstrip Patch Antenna air-filled dielectric, the baseline parameters (L, W, h1, and ho) are determined at centre frequency, fo anddielectric permittivity ε1. The H- and double E-shaped are then introduced on the patch with the initialvalues slots parameters to reduce the patch size and crosspolarization level. Next, the L-probe isintroduced to feed the patch and its parameters are adjusted to achieve the broadband requirement. 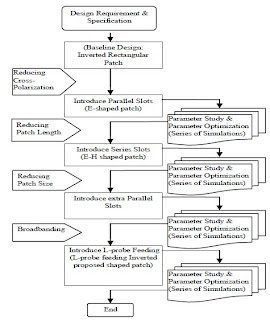 shows the simulated result of the return loss of the proposed antenna. The two closely excitedresonant frequencies at 1.93 GHz and at 2.18 GHz as shown in the figure gives the measure of thewideband characteristic of the patch antenna. The simulated impedance bandwidth (VSWR≤2) of21.79% from 1.84 GHz to 2.29 GHz is achieved at 10 dB return loss.Mohammad Tariqul Islam, Mohammed Nazmus Shakib, Norbahiah Misran and Tiang Sew Sun 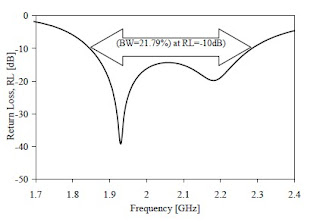 The simulated radiation patterns at the second resonant frequency in the xz-plane and yz-planeare plotted in Figure 4. For the sake of brevity, only calculated radiation pattern for second resonancefrequency is given in this paper. As shown in Figure 4, the designed antenna displays good broadsideradiation patterns in the xz-plane and yz-plane at upper resonant frequency. It can be seen that 3-dBbeamwidth of 65º and 50º for xz-plane and yz-plane respectively at 2.18 GHz. The crosspolarizationpattern is lower than about -35dB in xz-plane. The L-probe inverted proposed patch antenna exhibitsbetter crosspolarization than the design reported in (Tariqul Islam et al., 2007). Notable, the radiationcharacteristics of the proposed antenna are better to those of the conventional patch antenna. Theradiation patterns at other bands, which are similar to those at 1.93 GHz, are not presented here indetail. 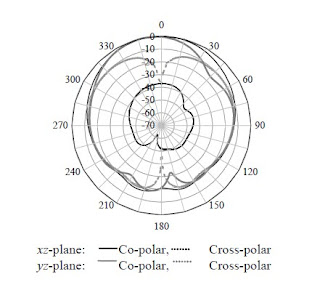 The simulated gain of the L-probe fed inverted proposed patch antenna at various frequencies isshown in Figure 5. As shown in the figure, the maximum achievable gain is 9.5 dBi at the frequency ofBroadband Microstrip Patch Antenna 1792.08GHz. The design has better gain variation of 0.9dBi compared to conventional rectangular patchdue to the embedded slots. 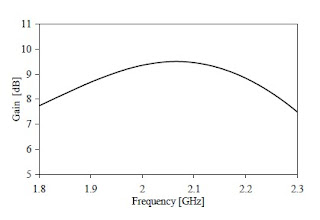 A novel technique for enhancing bandwidth of microstrip patch antenna is successfully designed in thisresearch. Simulation results of a wideband microstrip patch antenna covering 1.885 to 2.200 GHzfrequency have been presented. Techniques for microstrip broadbanding, size reduction, andcrosspolarization reduction are applied with significant improvement in the design by employingproposed slotted patch shaped design, inverted patch, and L-probe feeding.The proposed microstrip patch antenna achieves a fractional bandwidth of 21.79% (1.84 to 2.29GHz) at 10 dB return loss. The maximum achievable gain of the antenna is 9.5 dBi with gain variationof 0.9dB. The proposed patch has a compact dimension of 0.544 0λ × 0.275 0λ .The wideband characteristic of the antenna is achieved by using the L-shaped probe feedingtechniques, the use of series slots (H-shaped) and use of another pair of parallel slots (E-shaped) lead tothe patch size reduction. Better radiation performance is achieved by embedding parallel slots onto thepatch (E-shaped) while the use of inverted patch improves the gain of the antenna. The compositeeffect of integrating these techniques offer a low profile, broadband, high gain, and compact antennaelement suitable for array applications.
Jorge L. Polentino U.
19769972
CRF
http://www.eurojournals.com/ejsr_27_2_02.pdf
Publicado por Tecnología en Telecomunicaciones - conocimientos.com.ve en 16:05