Introduction
MEMS microswitches are receiving increasing attention, particularly in the RF community. Low power consumption, large ratio of off-impedance to on-impedance and the ability to be integrated with other electronics; makes microswitches an attractive alternative to other mechanical and solid-state switches. MEMS switches can be used in a variety of RF applications including cell phones, phase shifters and smart antennas1,2,3 and also in lower-frequency applications such as Automatic Test Equipment (ATE) and industrial and medical instrumentation

We have developed an electrostatically actuated MEMS microswitch for both DC and RF applications. The microswitch is a 3-terminal device that employs a cantilever beam (Figure 1) and is fabricated using an all-metal, surface micromachining process on high-resistivity silicon4,5,6,7,8. In operation, the beam is deflected by applying a voltage between the gate and source electrodes (marked G and S in Figure 2), so that the free end of the beam contacts the drain (marked D in Figure 2) and completes an electrical path between the drain and the source. The contact material is a thin layer of a Platinum group metal deposited on the underside of the beam and on the drain. The device operates in a hermetic environment obtained through a wafer- level capping process (Figure 3). Since 1999 we have employed a commercial MEMS foundry for switch fabrication and have obtained fabrication yields in excess of 90%.

Ongoing activities include manufacture of prototypes for use in a X-band Electronically Steerable Antenna (ESA) under an US Air Force contract, process and design modifications to optimize RF performance and contact resistance, and development of a 4-terminal relay for better isolation between the actuation and signal paths.

Low Frequency Performance and Applications Important operational characteristics are as follows. A gate voltage between 40 and 120 V, depending on the specific design, actuates the microswitch. Devices are usually operated at a contact force of 200 µN, and have a single contact resistance of 3 Ω. Switches typically have 8 contacts in parallel to yield a total on-resistance,
including interconnects, of less than 1 Ω at DC and low frequencies.

Device lifetime is generally measured at a current of 10 mA or less with the current applied only during switch closure (to avoid hot "breaks" and "makes", i.e. "cold-switched"). Under these conditions, switch lifetime exceeds 1010 cycles (Figure 4). Measurements at higher currents, up to 500 mA per switch contact, show lifetime greater than 109 cycles. Currently, lifetime measurements are limited by test time, rather than any failure mechanism. A relatively small number of hot-switching lifetime measurements with 1 V indicates a life of about 107 cycles with the lifetime limited by erosion of the drain metal.

Another characteristic, which is important for some low-frequency applications, is the "stand- off" voltage, or the maximum voltage that can be applied across an open switch without damaging it. A voltage across the open microswitch sets up a field in the gap between the drain and the end of the beam. This can cause the switch to fail in two ways, either by causing the beam to deflect and closing the switch, or by causing an electrical breakdown of the gap. In our current designs, the failure is due to beam deflection, and occurs at about 150 V.

Microswitches are interesting candidates as replacements for low-power mechanical relays (generally reed relays), particularly in applications utilizing a large matrix of relays, often for multiplexing. Examples of such applications are pin electronics in Automated Test Equipment, transducer arrays in medical ultrasound, and sensor and data acquisition applications. Microswitches can bring significant savings in size and power consumption in such applications, and may also provide longer life. For example, a 8x8 array of reed relays each 2 cm x1 cm in size would occupy 250 cm2, the same array using microswitches would consume 1 cm2. Some applications may require an improvement of the stand-off voltage limit, and the hot- switched power handling capability. Certain applications may require a true 4-terminal relay, in which the signal path does not share a terminal with the actuation circuit. Prototypes of such devices have been built (Figure 5).

The benefits and applications for MEMS RF switches as fundamental building blocks, supplanting PIN diode and FET RF switches are numerous because MEMS switches combine the best features of both, having the low control power requirements of FETs, but having "on" resistances (and RF insertion losses) lower than PIN diodes. Furthermore, MEMS switches have lower off-state capacitance and, as a result, better off-state RF isolation than either FETs or PIN diodes, and, in addition, have inherently high RF linearity. Intended applications include microwave switches that replace PIN diode and FET switches, while providing lower insertion loss, higher isolation, higher linearity, higher radiation resistance, superior tolerance for high temperature environments, and lower prime power consumption. Examples of such applications include T/R switches in a variety of products such as cellular handsets and base stations, phase shifters for Electronically Steerable Antennas, tunable filters and reconfigurable antennas, to name a few.

One application of current interest is the cellular telephone market. Here, the frequency of interest is approximately 2 GHz. Measured performance of our wafer-level capped MEMS switches are very good at this frequency, with an insertion loss of 0.3 dB and isolation of 30 dB for a single element, series, SPST switch in a 50 mil sq. capped die package similar to that of Figure 3. This RF insertion loss is several tenths of a dB better than most current PIN diode, MESFET, and PHEMT switches with comparable isolation at this frequency. By combining series and shunt MEMS switches within the same capped package, substantially higher isolation should be attainable in the future, with little degradation in insertion loss. Future plans also include capped SP2T, SP4T, and transfer switches.

Measured insertion loss and isolation are plotted on Figure 6 for a 4 contact switch from 0 GHz to 4 GHz. Most of the insertion loss at the higher frequencies is due to reflections (return loss) caused by inductive wire bonds and by switch inductance, and is not due to switch resistance. This reflective loss will be mostly eliminated in the future by reducing switch inductance. Efforts are currently underway to increase the off-state switch isolation by modifying the switch geometry and to decrease the on-state insertion loss by identifying and minimizing the various loss mechanisms.

Summary
We have developed a surface micromachined microswitch which can be used in applications from DC through microwave.

We have also developed a wafer scale package, and reported results in this package up to 4 GHz. Key characteristics for a single element, series, SPST switch are; at 4 GHz, insertion loss of 0.4 dB and isolation of 27 dB.

Applications for our microswitch include T/R switches in a variety of products such as cellular handsets and base stations, phase shifters for Electronically Steerable Antennas, tunable filters and reconfigurable antennas, pin electronics for Automated Test Equipment, transducer arrays in medical ultrasound, and sensor and data acquisition applications. 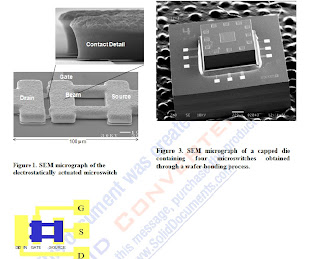 Figure 2. Schematic representation of the microswitch shown in Fig. 1. 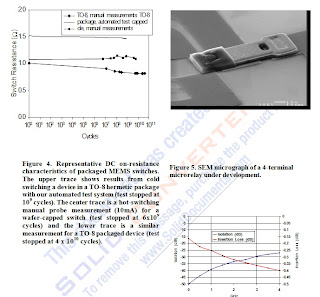